Helchemy is a new full length Gydja release on AFE Records, the label of Andrea Marutti (Amon, Never Known). It features two 25 minute tracks: The Spirit of the Earth With Venom Intoxicate and The Black Sea, the Black Lune, the Black Soll. Helchemy is a title i’ve used and intended to use for work on and off over the last decade; initially recording a full, but unreleased, cassette-based work with that title way back in the late-nineties. I still have that cassette in the archives, but haven’t listened to it in years, and suffice to say, none of it made its way into this new Helchemy. Instead, this incarnation uses pieces of sound i’ve recorded over the last couple of years, some for other concepts that moved on without them, and then brought together in 2007 and 2008. Since i first thought of using the portmanteau as the title for a piece i’ve been interested in the way in which the alchemical process resembles shamanic initiation, especially how distillation mirrors dismemberment. While the title might suggest a survey of the entire alchemical journey, the album primarily concerns itself with just a few specifically Helish themes. Most obvious of these is the venomous black toad that is found in alchemical tracts such as the Ripley Scroll (a version of which is used in the album artwork), Norton’s Mercurius Redivivus, and Michael Maier’s marvellous book Atalanta Fugiens (the album includes melodies taken from Maier’s illustrations in Atalanta Fugiens). In alchemy, the toad may have represented the prima materia, the matter with which an alchemist would begin, but it was also seen as the symbol of the final product: the Elixir, the Philosophers’ Stone, or gold itself. In his Camp of Philosophy, Bloomfield, one of the early English alchemists, lists the Toad as one of the names for the Philosophers’ Stone, along with other alchemical euphemism like our Azoth, our Basilisk, our Cocatrice, Mercury of metalline essence, and the Eagle flying fro’ the north with violence. In other instances, the toad represented the fifth alchemical phase of putrefaction. This transformational stage was otherwise symbolised by yet more Helish imagery, such as the black sun, the death’s head, and the raven; indeed, another name for this stage is Caput Corvi.

Helchemy is limited to 100 copies and comes in a pro-printed cardboard sleeve with artwork by yours truly. The cover features the design below, while the inside spread is a full colour elaboration of the album’s bufonial themes. The Gydja page at Myspace has an excerpt from the second track and there are very short samples from both tracks on the album page at Last.FM. 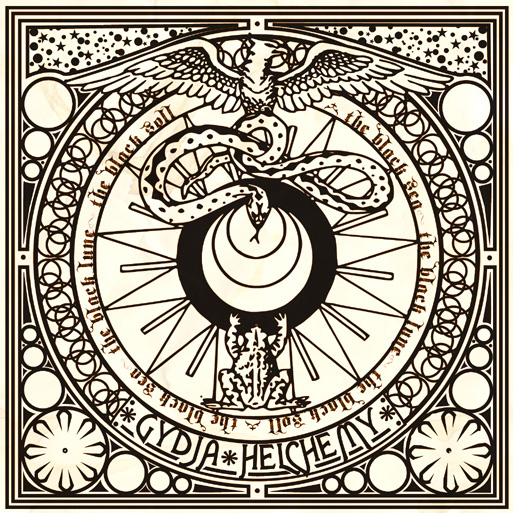