Edgar Kerval and I had discussed collaborating on a musical project for several years before we finally brought Emme Ya and Gydja together. Despite this gestation, the theme (for dark ambient must always have a theme) was one that eluded us. Given some of the concepts considered by both Gydja and Emme Ya, a Babalonian motif seemed appropriate, but since I had recorded a whole double CD worth of Babalon-inspired material several years ago, this felt like it would be a retread, a wearing of the material that could leave it a little thin. Eventually, after much contemplation, I had a realisation: Marjorie Cameron.

For as long as I have explored magick, Cameron has had a place, often flitting on the boundaries, always unexplored but promising so much more. Whether it was in her enigmatic appearance in Kenneth Anger’s Inauguration of the Pleasuredome, which I first saw presented by Anger himself in a theatre screening of all his work in the early 90s, or in the all too brief mentions she was afforded in the biographies of Aleister Crowley and Jack Parsons. I knew of her involvement with Parsons as the elemental result of his Babalon working and was, in turn, aware of the dismissive tone that Parsons, the working, and, therefore, the result herself, was often treated in Thelemic hagiography. Parsons, that incorrigible child to the world weary Therion, so much like Uncle Al, but with a brash thoroughly modern, and so thoroughly American, attitude that any Anglophile would naturally side against and dismiss as so much New World bluster. And then there was Cameron, identified first by Parsons as an avatar of Babalon, and then by herself as Babalon incarnate: such hubris, such blasphemy, in a belief system built on pride and transgression. There was always something so romantic, so poetic, in Parsons being consumed in the flame of the explosion that took his life (rather than being like Edward Alexander who, to quote David Tibet’s memorable line, “in some sad home falls alone”) and despite their tumultuous relationship, Cameron seemed integral to this spirit of apotheosis.

But Cameron was so much more than simply a dark muse to Parson’s dark star. While he wrote paeans to her, his witch woman, she was no hollow object of adoration. She was a remarkable painter and poet in her own right, and a magickian too. One who spent her life following the death of Parsons working magick atavistically, taking it out of the ritual chamber and into the everyday, as one would expect of someone who believed themselves to be the living incarnation of a goddess.

My reacquaintance with Cameron took two expressions, both aural and visual, as the creation of musical interpretations of her life and magick coincided with the development of three graphic works for Gnosis, a collaborative exhibition of occult-themed art held at Nature: Art + Design in Auckland. These pieces were rendered as black and white illustrations, heavily inspired by Cameron’s ephemeral figures (but by no means approaching her genius), and were printed on cartouche-shaped sheets of aluminium composite. The three works distilled some of the major themes of Cameron’s life and magick: Dark Star addressed her relationship with Parsons, her dark star that she sought “in all the endless rooms of the universe,” while We Shall Ascend The Stair, and I Bear A Lamp both took lines from her experimental film Wormwood Star and interpreted them as explorations of the nightside. These themes were, in turn, translated into tracks, while the apocalyptic motifs underlying Cameron’s search for the Wormwood Star provided other songs, as well as the album’s title: Apsinthion.

Edgar and I exchanged our respective compositions and added elements to them. In this alchemical process, I found Emme Ya’s material and the titles melding surprisingly well with the themes I had already mapped out. Dissolution in the Arms of Hekate reminded me of Inauguration of the Pleasuredome, in which Kenneth Anger himself appeared as a psychopompish Hekate, while Descending through the red labyrinth, a quintessentially Emme Ya title if ever there was one, fitted in well with the nightside journey detailed by Cameron in her Wormwood Star narration.

The artwork created for the Gnosis exhibition formed the basis for the sleeve design for Apsinthion, while these elements were also incorporated into a brief video trailer.

I have described the music I create as Gydja as devotional music, music that is not only for devotion but which is, in its very creation, an act of devotion. Often the object of this devotion is the goddess Hela, but in this case, it is fair to say that the object is another expression of the divine. Whether one chooses to accept her status as either an avatar, or the very embodiment, of Babalon, it is hard not to see in Cameron someone who was touched by the spirit of the red goddess. This Witch Woman, this Candida, this Hilarion, she who would wander “in the witchwood under the Night of Pan, and know the mysteries of the Goat and the Serpent, and of the children that are hidden away.” 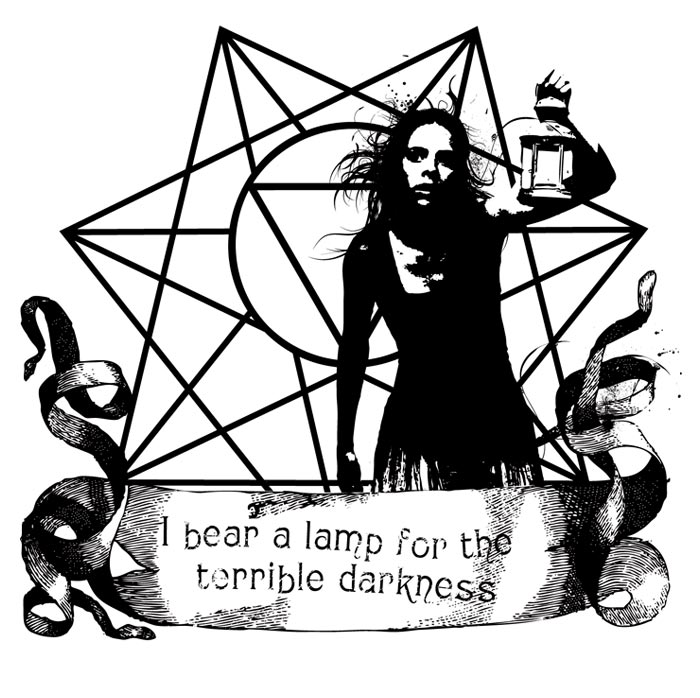